Cornish wildlife artist Jon Tremaine was born in Truro, United Kingdom, and from a young age would spend his time in his local woods collecting fungi, exploring streams and spotting wildlife. Jon is a self-taught artist, and began to create drawings in his unique style in 1981, though didn’t continue with his passion until 28 years later! Jon exhibited his wildlife art for the first time in 2008 and has since become well known by nature lovers and art collectors throughout the UK and abroad.

College and University students often study Jon’s art as part of their course work, he also works with local Primary schools to further their interest in art and nature. He can usually be found engrossed in his latest drawing at his working artist studio and gallery in Lelant near St Ives, Cornwall.

Jon creates his wildlife art using a Rotring pen drawing directly on to Schoellershammer art board. This pen has the finest 0.10mm nib affording him to draw with great precision. His pen and ink wildlife drawings are a labour of love, taking up to two hundred and eighty hours to create.

Jon says: “Animals are amazing; I’m in awe of how they fend for themselves and adapt to their environment.” For him, interpreting their shapes and weaving them together to create these fascinating drawings is the challenge. “A lot of thought has to go in to deciding how the fauna and flora will merge and how to add structure within the bigger picture. It takes time and cunning to consider how each component part of the drawing will relate to another in terms of relevance, shape, tone and form”.  Whilst the wildlife images come from Jon’s observations, photographs and reference books, the flora detailing can sometimes be Jon’s artistic interpretation drawn from his experiences, imagination and joy gained from his walks in nature.

Jon’s sells his work internationally, he has a strong following in Australia, Germany and the States. His work has been featured in many regional editorials and international magazines. Closer to home he is a keen business supporter of the Cornwall Wildlife Trust and RSPB. 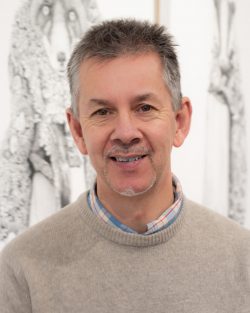